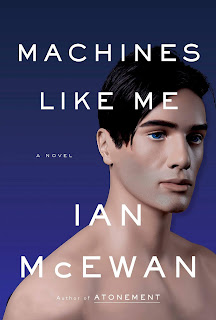 CANCELLED
MAY BE RESCHEDULED AT A FUTURE TIME

Meet Adam. Out of the box he is an artificially intelligent man, bought for amusement by Charlie, a drifter, and used as a lure for Charlie’s crush, Miranda, a liar. Adam grows from machine infancy to intellectual superiority as he ingests research, information, and theories of business, economies, and global history. What he does not understand–and what becomes the crux of his new life–are the emotional entanglements, irrational thinking, and ethical shortcuts that define human beings. As Charlie and Miranda begin to use Adam for their own purposes, we as readers wonder how human beings and humanoids will thrive. In Machines Like Me, author Ian McEwan (Atonement) weaves the noble views of Adam into the messy lives of Charlie and Miranda. To serve his purpose, the author plots out the tale on an alternative timeline in which Alan Turning–the computer genius who introduced artificial intelligence–did not commit suicide in 1954 and is instead alive in 1982 to witness what happens when humans by origin and humans by programming collide.

Copies of the book are available for checkout at the Circulation Desk. Seating for the event is limited!