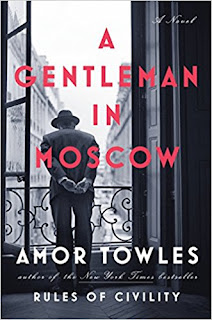 A Gentleman in Moscow tells the story of Count Alexander Rostov, who is sentenced to live in the Metropol, a grand hotel in Moscow, for the rest of his life. It is 1922, and a Bolshevik tribunal decides he has written a poem which will encourage revolt. The Count has been living in the same hotel with an aristocratic lifestyle, but is now moved to a much smaller attic room where he has to assume a simpler way of life.

From within the confines of the hotel, the reader sees how life in Moscow changes over four decades. We witness the destruction of the Russian aristocracy and the rise of Communism.

The story of Count Alexander Rostov will entice you throughout the novel as he manages to survive and find meaning through a series of unusual circumstances. The count perseveres and keeps to his routine until he meets someone who will change his life.

Amor Towles creates characters whose lives are quirky and interesting, and he brings the sights and sounds of Moscow in the 1920’s and 1930’s alive for the reader. He creates a cinematic experience with his elaborate scenes and descriptions of clothing and decor.

This novel was a bestseller, and when you meet Count Alexander Rostov, you will see why this is true.

Copies of the book will be available for checkout at the Adult Circulation Desk beginning on April 7th. Seating for the event is limited!