My Account
Menu
MAGIC BY GEORGE
Thursday, July 28th, 2016
at 4 PM
For families with children ages 5 and up
Watch for free tickets at the Youth Services Desk 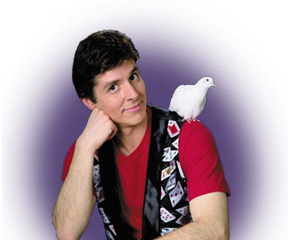 George’s fun-filled shows will keep you on the edge of your seat with exciting magic and lots of audience participation. Marvel at the appearance of live doves, and watch in amazement as a member of the audience actually floats in midair!
George continually travels throughout New England entertaining audiences large and small with his unique blend of award-winning magic. He has appeared on the “CBS Early Show”, at Sesame Street’s “Fun to be One” celebration, and performs regularly at Universal Studios’ City Walk. His reputation has not only earned him some of Magic’s highest awards and honors, George has also been voted “Boston’s Favorite Family Entertainer” two years in a row by The Boston Parents’ Paper!