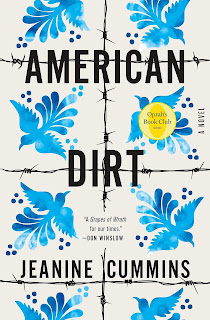 An Editors’ Choice Selection from The New York Times Book Review, as well as a regular entry in Perrot’s Top Ten list of hot books for the last several months, American Dirt is the story of a Mexican mother and her son who are forced to flee their homeland when her husband’s expose on the local drug cartels is published. Here’s what Maureen Corrigan of NPR’s Fresh Air had to say about it: “American Dirt is a literary novel with nuanced character development and arresting language; yet, its narrative hurtles forward with the intensity of a suspense tale. Its most profound achievement, though, is something I never could’ve been told… American Dirt is the novel that, for me, nails what it’s like to live in this age of anxiety, where it feels like anything can happen, at any moment.”
Tuesday, September 29th, 2020 at 7 PM via Zoom
Register for this event
For more information, contact lending@perrotlibrary.org
American Dirt is available to check out as a physical copy, an audiobook CD, an ebook, or a downloadable audiobook