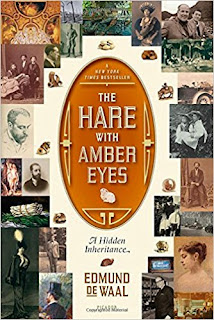 PRE-REGISTER NOW AT THE ADULT CIRCULATION DESK AND GET YOUR COPY OF THE BOOK- SEATING IS LIMITED TO THE FIRST 20 REGISTRANTS!

For nearly a century, the Ephrussi family controlled a business empire in Europe, massing wealth and objets d’art. A Parisian Ephrussi, Charles, who was a patron of the Impressionists, and inspiration for Marcel Proust’s Charles Swann, purchased a collection of 264 tiny Japanese carvings called netsuke, including a hare with amber eyes.

In 1899, Charles sent the collection as a wedding present to his cousin, Viktor Ephrussi, in Vienna.

When the Nazis annexed Austria in 1938, they confiscated the Ephrussi’s business interests, and their extensive art collection. The netsuke escaped their clutches, hidden in the mattress of a loyal maid, Anna, for the duration of the war.

Edmund de Waal, a noted ceramicist, inherited the netsuke from his uncle Ignace, who had left for America before the war and served in U.S. Army Intelligence. The collection provides a thread weaving together this fascinating memoir of art, history, and family.