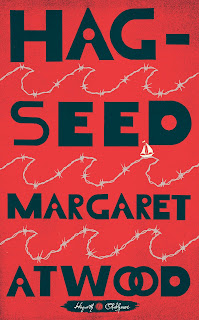 Borrow a copy of the book from the Circulation Desk beginning on February, 12th, 2018. Please note that seating for the book discussion is limited.

Hag-Seed, by award-winning novelist Margaret Atwood, is a retelling of Shakespeare’s play, The Tempest. The novel, one in a series from the Hogarth Shakespeare Project, is described by the New York Times Book Review as a “marvel of gorgeous yet economical prose, in the service of a story that’s utterly heartbreaking yet pierced by humor, with a plot that retains considerable subtlety even as the original’s back story falls neatly into place.”

About the Book: Felix is at the top of his game as artistic director of the Makeshiweg Theater Festival. His productions have amazed, and now he is about to stage a Tempest like no other: not only will it raise his reputation, it will heal emotional wounds.

That was the plan, but after an act of unforeseen treachery, Felix is living in exile. He is haunted by the memories of his beloved lost daughter, Miranda, and is determined to exact his revenge.

After twleve years, revenge finally arrives when Felix signs on to teach a theater course at a nearby prison. Here, Felix and his inmate actors will put on his Tempest and snare the traitors who destroyed him– it’s magic! But will it remake Felix as his enemies fall?

About the Project: The Hogarth Shakespeare Project presents the Bard’s works through an imaginative retelling by some of the world’s most esteemed novelists. Launched in 2015, books are planned through 2021. Current plans include publication in 20 countries. See www.hogarthshakespeare.com for further details.