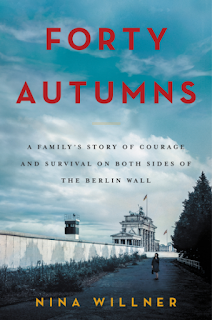 PRE-REGISTER NOW AT THE ADULT CIRCULATION DESK AND GET YOUR COPY OF THE BOOK- SEATING IS LIMITED TO THE FIRST 20 REGISTRANTS!

Forty Autumns is the true story of a family separated during the Cold War by the authoritarian government of Easy Germany. The Soviets took control of East Germany after World War II and established a repressive communist satellite state. When the Berlin Wall went up in 1961, a subversive government trapped an entire country, turning neighbor against neighbor and completely eliminating any contact with the outside world.

This is the story of one family member who escaped into Berlin and eventually into the United States. It took her 40 years to go back and see her family, and by then the effects of starvation and deprivation had taken their toll on her parents, brothers, and sisters.

Nina Willner’s voice in retelling her story is a lesson in courage and frustration. The inability to find out where her family was and the fear of the secret police penalizing her family because of Nina’s freedom are the essence of her journey.

This is not simply a story, but a true history of what happened to a country that was divided and repressed to a degree that hopefully will never be seen again.

History is rewritten and relived over and over. This is a narrative that is recent and true and frames a family you will never forget.