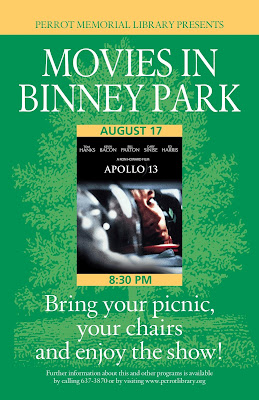 Perrot is pleased to present our thirteenth annual series of Movies in the Park in Binney Park. Bring your picnic, your chairs, and enjoy the show!
APOLLO 13
(1995, Rated PG, 140 minutes)
Saturday, August 17th, 2019, at 8:30 PM
[No Rain Date]
It had been less than a year since man first walked on the Moon, but as far as the American public was concerned, Apollo 13 was just another “routine” space flight– until these words pierced the immense void of space: “Houston, we have a problem.” Stranded 205,000 miles from Earth in a crippled spacecraft, astronauts Jim Lovell, Fred Haise and Jack Swigert fight a desperate battle to survive. Meanwhile, at Mission Control, astronaut Ken Mattingly, flight director Gene Kranz and a heroic ground crew race against time–and the odds–to bring them home.
(Plot summary from IMDb.com)