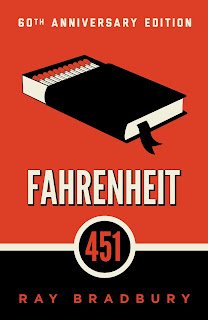 Sixty years after its original publication, Ray Bradbury’s internationally acclaimed novel Fahrenheit 451 stands as a classic of world literature set in a bleak future. Today, its message has grown more relevant than ever before.

Guy Montag is a fireman. His job is to destroy the most illegal of commodities, the printed book, along with the houses in which they are hidden. Montag never questions the destruction and ruin his actions produce, returning each day to his bland life and wife, Mildred, who spends all day with her television “family.” But when he meets an eccentric young neighbor, Clarisse, who introduces him to a past where people didn’t live in fear and to a present where one sees the world through the ideas in books instead of the mindless chatter of television, Montag begins to question everything he has ever known.

The New York Times called it “brilliant . . . startling and ingenious . . . Mr. Bradbury’s account of this insane world, which bears many alarming resemblances to our own, is fascinating.”

About the Author:
Ray Douglas Bradbury (1920 – 2012) was an American novelist, short story writer, essayist, playwright, screenwriter, and poet. Born in Waukegan, Illinois, he later graduated from a Los Angeles high school and began selling newspapers on LA street corners from 1938 to 1942, spending his nights in the public library and his days at the typewriter.

His reputation as a writer of courage and vision was established with the publication of The Martian Chronicles in 1950, which describes the first attempts of Earth people to conquer and colonize Mars, and the unintended consequences. Next came The Illustrated Man and then, in 1953, Fahrenheit 451, which many consider to be Bradbury’s masterpiece, a story of censorship set in a future world where the written word is forbidden. In an attempt to salvage their history and culture, a group of rebels memorize entire works of literature and philosophy as their books are burned by the totalitarian state.

Ray Bradbury’s work has been included in four Best American Short Story collections. He has been awarded the O. Henry Memorial Award, the Benjamin Franklin Award, the World Fantasy Award for Lifetime Achievement, the Grand Master Award from the Science Fiction Writers of America, the PEN Center USA West Lifetime Achievement Award, among others. In November 2000, the National Book Foundation Medal for Distinguished Contribution to American Letters was conferred upon Mr. Bradbury at the 2000 National Book Awards Ceremony in New York City.

Companion Selections for Children:
For middle-schoolers: Ban This Book, by Alan Gratz
For elementary-schoolers: Hands Around the Library: Protecting Egypt’s Treasured Books, by Susan L. Roth