Code Girls:The Untold Story of the American Women Code Breakers Who Helped Win World War II, by Liza Mundy, has been chosen as the Greenwich Reads Together selection for 2018. Greenwich Reads Together is a community-wide reading experience which engages all of Greenwich in exploring a single book, culminating in a month-long series of special events and programs in the fall. 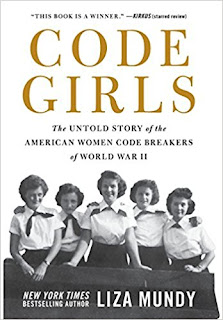 About the Book:
Recruited by the U.S. Army and Navy from small towns and elite colleges, more than ten thousand women served as codebreakers during World War II. While their brothers and boyfriends took up arms, these women moved to Washington and learned the meticulous work of code-breaking. Their efforts shortened the war, saved countless lives, and gave them access to careers previously denied to them. A strict vow of secrecy nearly erased their efforts from history; now, through dazzling research and interviews with surviving code girls, bestselling author Liza Mundy brings to life this riveting and vital story of American courage, service, and scientific accomplishment.

About the Author:
Liza Mundy is a journalist and author of four books, most recently Code Girls. She is a former staff writer for the Washington Post, where she specialized in long-form narrative writing, winning a number of awards. Her 2012 book, The Richer Sex, was named a top non-fiction book of 2012 by the Washington Post and a noteworthy book by the New York Times Book Review. Her 2008 book, Michelle, a biography of First Lady Michelle Obama, was a New York Times best-seller and has been translated into 16 languages. She writes widely for publications including The Atlantic, Politico, The New York Times, Slate, and TIME. She has appeared on The Colbert Report, The Today Show, GMA, CBS This Morning, MSNBC, CNN, C-Span, Fox News, Democracy Now, Bloggingheads TV, NPR’s Weekend Edition, and many more TV and radio shows. A senior fellow at New America a non-partisan thinktank, Liza has an AB from Princeton University and an MA in English literature from the University of Virginia. She currently lives in Arlington, VA with her husband and two children.